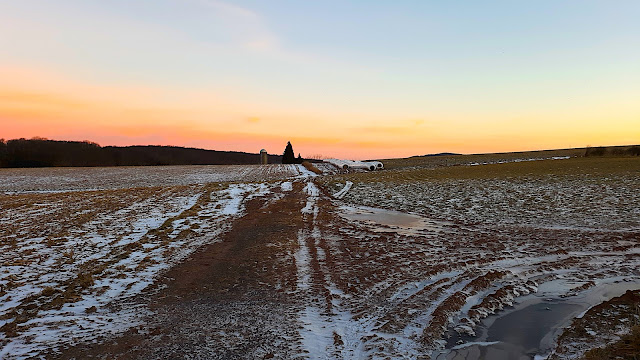 Happy to say I had a very nice walk OUTSIDE this morning.
31 degrees, very windy and after sunrise it was sunny.
Walked all around town, the ball park, and both cemeteries. 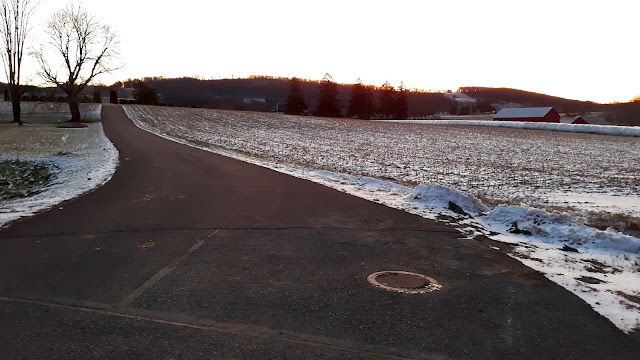 Walked down the road and saw a bulldozer
getting ready to destroy and old shed.
(behind that old house in town that I hoped someone would buy and fix up)
Picture not that good because I was a block away.
The road was blocked off so I couldn't get any closer. 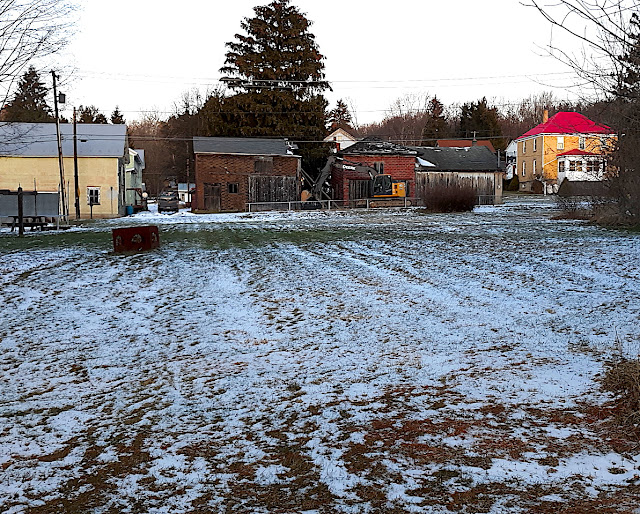 A little while later I walked past again and the building
was in the process of being smashed.
It made quite a racket.
And finally it all came down. 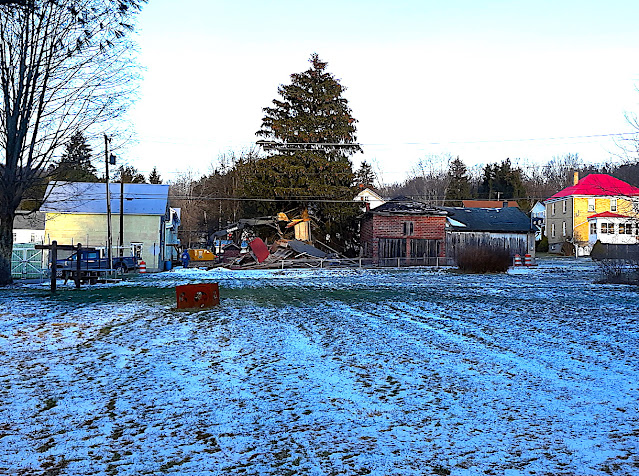 Now it all has to be hauled away.
I'm sure the other two buildings will be coming down too.
Saw Roger out walking his dog Andy around the ball park.
Didn't see Joy but she has been walking a little bit later.
Walked my usual 6 miles
☀️    💨    😊
Another oatmeal breakfast for me, no raisins this time just brown sugar.
After saying yesterday that I was reading The Pickwick Papers
by Charles Dickens and others comments on him I started
thinking of all the books of his that I have read and made a list.
1. The first book of his I read was David Copperfield many years
ago and that got me hooked.  Read it twice
2. Tale of Two Cities - read it twice
3. Great Expectations - read it three times
4. Oliver Twist
5. The Old Curiosity Shop
6. Domby and Sons
7. A Christmas Carol
8. Bleak House
9. Martin Chuzzlewit
10. Barnaby Rudge
11. Nicholas Nickleby
12. The Chimes
13. The Cricket on the Hearth
14. The Mystery of Edwin Drood
Ken finished 1984 and was of the same opinion as mine.
A bit boring and depressing.
Did a bit more work around the house (inside) and then
just puttered about.
Didn't feel much like cooking so for supper we had
hot ham and cheese sandwiches which hit the spot for us.
We also added a few potato chips.
Our frozen little waterfall outside our bedroom window. 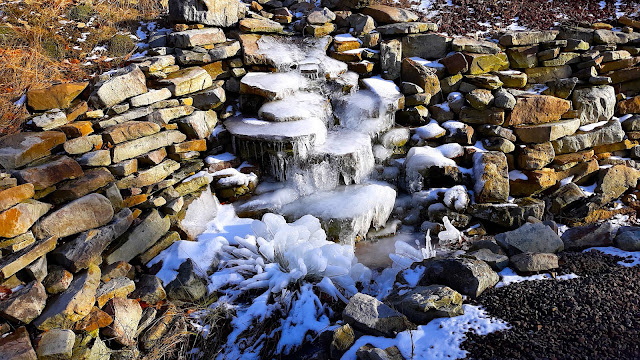 Thanks for stopping by.
A happy Wednesday to you. 😊
👩🏻‍🦳 happyone ❤️
Comment Replies:
Mari and Deb - Thanks for the title of the Dickens book, The Life of our Lord, that he wrote for his kids.  Will have to get a copy.
Posted by happyone at 5:31 PM

...we sure had a beautiful start to your day!

The photos are pretty - even though it looks so cold.
Dickens wrote so many good books. Deb is the one who told me about The Life of our Lord.

You've read more of Dickens than I have.

I'm impressed by the number of Dicken's books you've read. Most of them I haven't even heard of.

The frozen waterfall is quite pretty.,

Hi Karen, I had a grilled cheese sandwich for dinner tonight. I also like to have a few chips and a green salad with it. Charly had leftovers. You sure have read a lot of Charles Dickens books. Good for you! I have a goal of reading more classics this year and as always you are a great role model for me. :-) See you again tomorrow.

That is some view to watch when walking!

That's an impressive list of Dickens' books. I don't think I've read any of them or if I have I don't remember. Dear has read a few of them. Love the frozen waterfall. Glad you had a good walk outside today.

I love today's pictures. It seems to me that the light is already changing which is quite wonderful.

I just bought a newly published book on Dickens. A favorite author of mine... The mystery of Charles Dickens (non-fiction).

And one you may enjoy is an excellent read. Not by Dickens, but a new twist to Christmas carol...Mr. Dickens and his carol.

Pretty start to your day! You have read a lot of Dickens books. The sandwich sounds great, it is nice just to have an easy dinner. Take care, enjoy your day!

Has Dickens read any of his books, or just write them?

That's a big coin someone dropped in the second photo.

Sorry about the buildings, but they had probably become, b eyond restoration. Sighhhhhh

Want to get the Dickens book you spoke of first.

Read '1984' some years ago... It haunts me, to today. I could never own a paper weight, after reading that book. Though they are so lovely. Sighhhhhhhhhhh

Beautiful photos especially the first one. It looks desolate and very cold.

♥the waterfall. I always enjoy the PBS specials of Dickens. A new Christmas Carol (new to me) from 2019 with Guy Pearce.

Wow, I haven’t read any of Dickens books. Maybe I should give them a try.