Walking to town this morning the temperature was 64 degrees.
Very calm with a mix of sun and clouds. 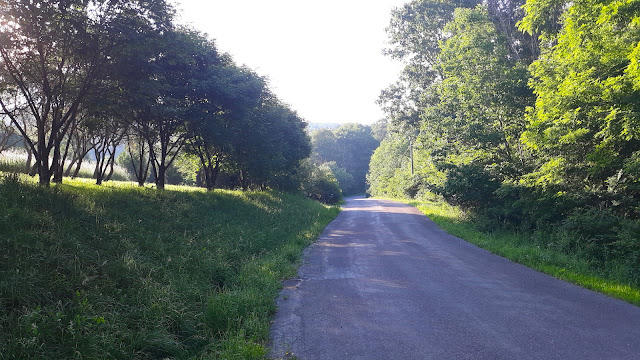 All the usual deer and rabbits were about this morning.
Besides all the usual birds I saw a couple of gray cat birds.

Once to town I just walked around the cemeteries a couple times
each and then it was a walk back home again.

Lena was walking down the hill from the cemetery as I was
starting up.

I had walked a little way down the road toward my house when I
heard a couple of sirens.  Didn't think much of it and continued home. 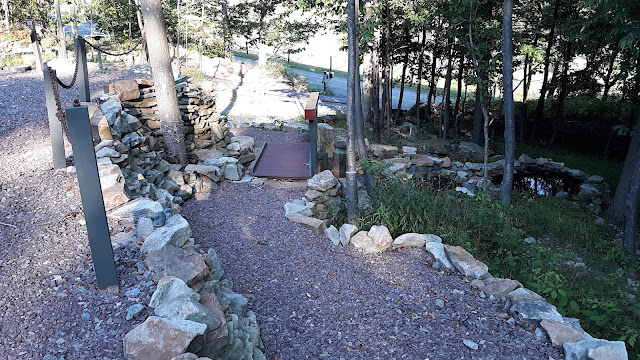 Got the garbage in the back of the truck and left for the
refuse center right after breakfast.

When we got to the main road found out what the sirens were about.
A pick up truck looked like it had rolled over after hitting
the guard rail right where I had just walked.

We went up to the other part of our property to put a few things
away in the shed up there.
Came back with a big flower pot and a few other things to
put around outside the house.
Pictures will come along as these items find just the right spot.

After lunch we just hang around the house doing this and that.
Always nice to take a few breaks and sit on the porch.

It's been another beautiful day though a little warmer
than usual with temps in the low 80's.
Might be getting a thunder storm.
Can hear thunder as I type this.

That's been my day.
Thanks for stopping by.
Life is Good
Find the good in your day.
happyone  ❤️ 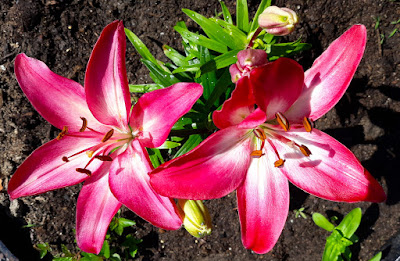 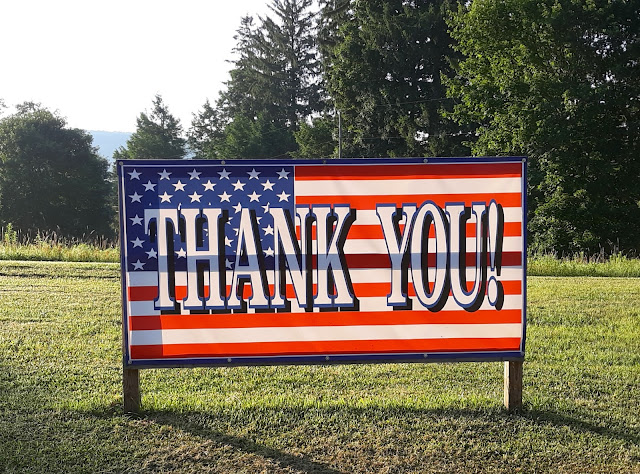 This morning it was 62 degrees when I walked to town.
Another sunny morning and calm.

Saw some deer just down the road from my house.
A small buck ran across the road and then I
saw this doe up in the field watching me. 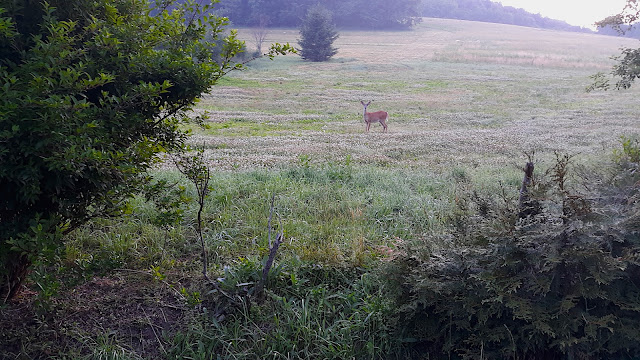 The dead deer was still on the side of the road from yesterday.
Surprised it wasn't picked up by now.
A little ways up the road there was another dead animal.
This time a coyote.
We heard coyotes the other night.
Boy they sure make an eerie sound.

Once I got to town walked a big loop all around.
Rebecca was out walking and a little while later I saw her
mom and dad (Lena and Jim) over by the post office.
We stopped for a chat.

Then I headed back home again.

A pancake breakfast today with strawberries and Redi Whip.
Would have been nice if we had blueberries too!
They would have been red, white, and blue.

Just hanging around the house today enjoying
another summers day.

Had lunch out on the porch and supper too.
❤️
Fourth of July 49 years ago Ken and I met.
Have told the story of how we met before but new blogger friends may not know.

My mother and father were divorced and my dad had a
boat which he kept on the Hudson River, in Nyack, New York.
I would drive up to the boat on weekends to see my dad and his girlfriend Jeanne.
One 4th of July I went up to the boat for the holiday
with my boyfriend and another friend of mine to spend the day.
Jeanne's two kids were to be there too
and I would be meeting them for the first time.
Her daughter Kathy was there with her 10 month old baby, Diane.
Her son, as you probably have guessed is Ken
who came up to the boat with his girlfriend.
Well when the two of us met there was a connection right away
and Kenny captured my heart that very day.
It made things a bit awkward
because we both happened to be engaged to other people.
We ended those engagements and started dating.
We were married the end of January just 6 months later.
Though my dad and Ken's mother did get married
they got divorced several years later
but for a time Ken and I were step-brother and sister!
My mother in law was also my step mother.
My sister in law was also my step sister.
When David and Debbi came along, not only were they our kids,
but also our nephew and niece.
Pretty crazy huh.
❤️


Thanks for stopping by.
Life is Good
Find the good in your day.
happyone  🇺🇸

Comment Replies:
Vee - The lake isn't in our town but about 10 miles down the road.  Deep Creek Lake it's called and summer brings tourists around the lake.  Tourists come in winter too for skiing but not has many as summer people.  Lots own houses all around the lake and some are pretty huge places.
Brenda's where we go for pizza over looks the lake.  I'm sure I've taken pictures of the lake but not that often.
We pass by the lake often as it is on the way to Oakland our biggest town in the county
which isn't saying much! 🙂
Posted by happyone at 6:00 PM 22 comments:

On this mornings walk to town it was 61 degrees,
calm, and a couple of low hanging clouds around. 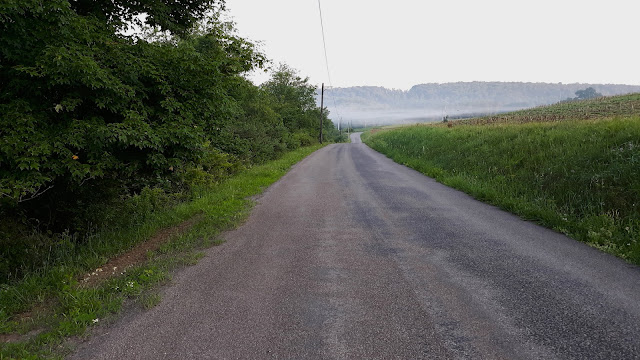 Walking up the main road there was a dead deer on the side that
got hit by a car.  Poor thing.  Was hoping it wasn't one of our
deer and passing by saw that it was a buck and our visitors are
all does.

Walked around the lower cemetery and then went back
to the main road in town and by then the sun was shining brightly.

Turned right at the road I'm coming up on here. 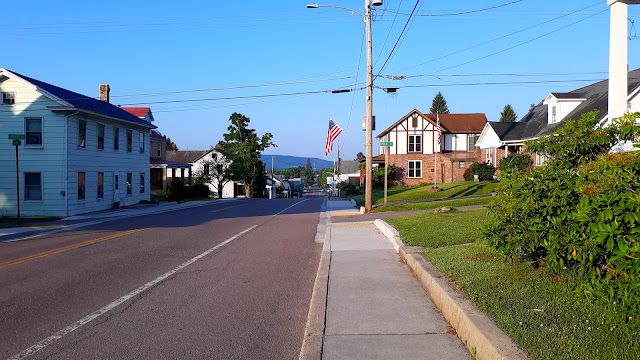 Then another left which takes me to the library in a few blocks.
Continued on to the post office which is back across the
main road, passed the day care center and then headed
back home.

Saw a woman running who I never saw before and we passed each other
two times.

Some wild flowers along the side of the road. 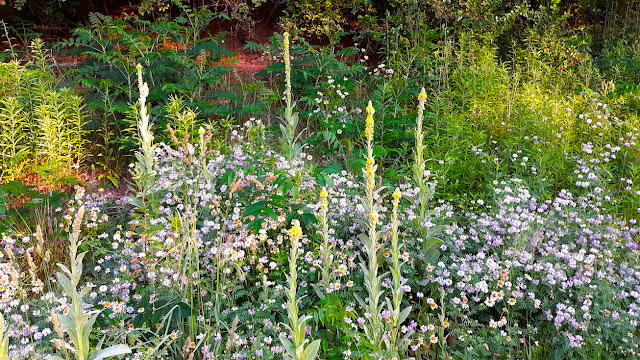 Pretty quite around town this morning.
Walked 5.7 miles

Finished up this weeks housework and even washed the living room
windows inside and out.
Easy to wash the outside because I can just stand on the porch.

We made a quick trip to the library and picked up a DVD.
Strange visiting a library now a days!

We also drove up to the Shop and Save because ice cream
is on sale and we are down to our last carton.
Didn't stop in though because the parking lot was packed!!
People up here at the lake for the 4th
and didn't want to be around all those people!!!

Another beautiful sunny summer day here.
Temperatures in the high 70's with a lovely breeze.
With the windows open in the living room it's like being outside.
The daisies I brought to this house from the house in town
will be blooming any day now. 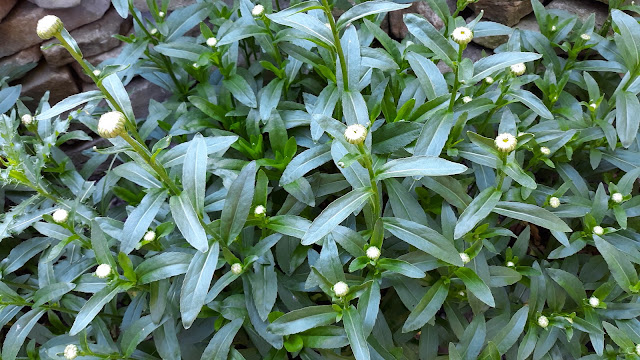 That's been my day.
Thanks for stopping by.
Life is Good
Find the good in your day.
happyone  ❤️
Posted by happyone at 5:53 PM 14 comments: