It rained last night and then got cold and we had a dusting of snow.
Was 19 degrees this morning and windy and I was too lazy to put
on all the layers of clothing to go walking so ended up getting
my 6 miles walked in the basement.
Walked 2 miles at a time.

☁️     ☁️     ☁️
I have a bunch of cooking magazines that I have been meaning
to go through saving some of the recipes before giving
the magazines away. 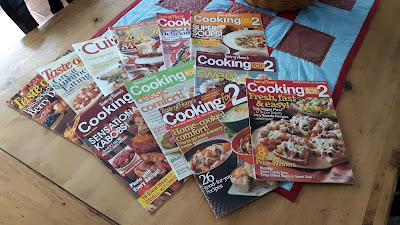 Today I went through them.
Instead of tearing the recipes out or copying them down
I took pictures of the recipes and put them in a file on my computer.

Finished reading Sugar Cookie Murder by Joanne Fluke.
Was somewhat disappointed in this one.
The story was covered in just half of the book and
the other half was nothing but recipes.

Bear hunting season was last month here in Garrett County for 5 days.
During that time 145 bears were killed.
There were 5,204 applications from across the state
to hunt the bears and 800 permits were given out.
The biggest bear weighed in at 539 pounds.
There are more bears around here than I thought.

Did the housework today that I've been putting off this week.

Never did see the sun today.
It stayed cold and windy.
A pretty quite day around here at Happy Trails. 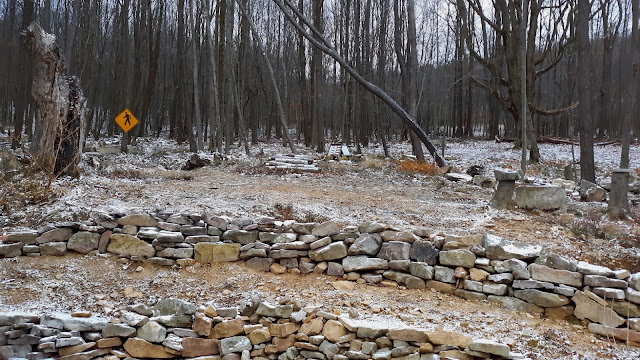 A happy day to you.
Thanks for stopping by.
happyone  🥰

Some pursue happiness, others create it.
unknown
Posted by happyone at 6:20 PM

A quiet day is a good day. We had sun today...I was very thankful for that.

...this was one of those days that wasn't very nice if weather is how you judge a day. No sunglasses were needed! That's a clever way to save recipes.

That was a lot of bears! Glad for hunting season that keeps the population healthy. You win the prize for snow before me. We were told there’d be snow, but it did nit come after all. I am not complaining. Not one little bit. What a great idea for saving those recipes...now the magazine can be left whole when you donate them or give them. I am quite sneaky getting rid of magazines...one of my favorite things is leaving them behind in waiting rooms. ☺️

That's some interesting information on bear hunting there. I will see what I can find on numbers here. There are more bears around than one would think. We see one occasionally, but, for the most part, they are more afraid of us than we are of them. Your last picture is beautiful, but the trees already look so bare. Winter is here. The weather guy even mentioned a bit of snow here on Monday.

That 539 pound bear must have been quite imposing! Probably some old Grandpa bear.

Yikes, that is a lot bears. I am rather clueless when it comes to hunting, but a 539 pounder sounds like quite a prize.
Your dusting of snow looks pretty and makes for a cozy indoor day.

Hi Karen- A dusting of Snow- sounds lovely though very cold. We've terrible Bush Fires to the North East of New South Wales and very hot winds there- to the South of the Boarder near Victoria it is Snowing...that is Australia for you- typical extremes. The fires on the Mid North Coast have destroyed over 100 Homes- 30 People have been injured and terribly one fatality...we're not even in Summer yet and it is still Spring...we fear more bad news to go.

Wow! That is a lot of bears I wonder what people do with them? I only ever ate bear meat once and I didn't like it at all. I imagine some people do enjoy it thought. It looks cold where you are but the dusting of snow looks very pretty.

It is really cold here now too, we saw just flurries yesterday. I wonder if there is a limit on how many bears can be killed? You had a great idea for saving the magazine recipes. Enjoy your weekend!

It's cold here. No snow.

It's a wet day here and chilly.
What a great way to save your recipes and it's easy. :)
Have a wonderful day!

"Some pursue happiness, others create it."

Hmm. That is something to think about.

Winter appears to be settling in there.

Hard to believe that many bears were killed. We have very few bears here but more are coming down from the north (we've been told). Poppy had one tear down his game camera across from his deer stand a couple years ago. The camera snapped a close-up of the bears face before hitting the ground. Now that should have been my hunting story. That cold front hit us too. It was 28 this morning. Sure is pretty around Happy Trails.

Funny thing about the weather here today in SC, it's ten degress colder than Chicago


How does that happen?

Sometimes it's nice to have a quiet day.
We've not had snow but the evenings and nights have been much colder and left a frost.