An early-morning walk is a blessing for the whole day. Henry David Thoreau
Walking is the perfect way of moving if you want to see into the life of things. It is the one way of freedom. If you go to a place on anything but your own feet you are taken there too fast, and miss a thousand delicate joys that were waiting for you by the wayside. Elizabeth von Arnim

31 degrees this morning, calm, and lots of sunshine.
Walked 6 miles
Sunrise 7:13
First walked around both cemeteries and ball park.
Headed over to the Dollar General where I turned around in the
parking lot and then walked back through town up and down
the side streets.

Very quiet in town and didn't see anyone else out.
Not many cars passing through either.
Sure nice to be walking in the sunshine.
A year or so ago one early Sunday morning when I was walking through town
I saw a man in front of the car dealers jumping around and acting odd.
It looked to me like he was pretending to be a cars salesman.
He was yelling about car specials and prices.
I avoided walking past him and went down another road.
A few days later I saw this same man inside the car dealership at a desk
and he waved to me as I walked by which he did most days afterward.
Turns out he was making a FB Video when I happened to
see him that first time. (Have seen him many times since)
He is known as the Wiggle Man

I learned his name was Phil when we stopped to chat a while back.
I told him about the first time I saw him and thought he was crazy.
He had a good laugh about it.
☀️    🥾    😊
The library opens at 9:00 on Saturdays and we were there
a little later to drop off some books and a DVD.
Picked up another DVD and two books for me.
From there we went the dump and got rid of our garbage.
Last stop was the Dollar General before going back home.
Finished the Decembers baby blanket yesterday.
That was record time - took only 10 days.
Now I'm back to knitting the ripple afghan until I start
on the next baby blanket.
We've had our fill of turkey and today we are back to pizza for supper.
Thanks for poppin' in for a visit.
👩🏻‍🦳happyone😊 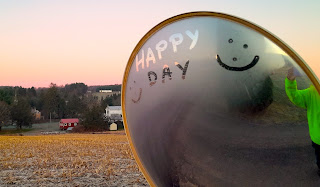 Comment Replies:
Melanie - How long it takes us to do a puzzle varies on how often we work on it, but I'd say about a week or so.  This one may take a bit longer.
No, haven't started any Christmas decorating yet. Probably won't till two weeks before.
Posted by happyone at 26 November

...we have a number of crazy car dealers here who do strange ads.

We have had a sunny day here too. It's so nice.
I laughed at your car salesman story. I can just picture it!
Happy Day to you too!

It doesn’t take long for me to get my fill of turkey. I am amazed at how green the grass looks in your pictures.

What a funny atory about the car salesman. I wonder if his hijinks and antics help him sell cars, or puts people off?

It was cloudy and rainy here today. More snow expected next week. That is a funny story about the Wiggle Man. I'm tired of turkey too, so I made broccoli and cheese soup for dinner. See you again tomorrow.

Too funny about the guy at the car dealership. Glad to hear he wasn't a crazy person after all.

Tha FB guy would get the same 'crazy tag' from me too.
❤️ Pizza!!

Back to pizza! That sounds good. I am considering purchasing some chicken and getting some cranberry sauce and making some stuffing as I missed out on leftovers. Laurel and I went out the day after Thanksgiving and had tacos—yummy.

The story about Phil was so funny. I would have thought he was nuts, too.

That first shot is very appealing.

That is funny about the first time you saw Phil! Glad he heard the story. Since we didn't cook a turkey this year we didn't get a chance to get tired of it. Hope you have a wonderful Sunday.

We had a car salesman here, who had his own Unique Way, too. -grin-

What a lovely blue sky in your photograph.

That is funny about the Wiggle man...

That's funny about the Wiggle man! Looks like a beautiful walk!