Walking to town it was calm, sunny and 63 degrees. 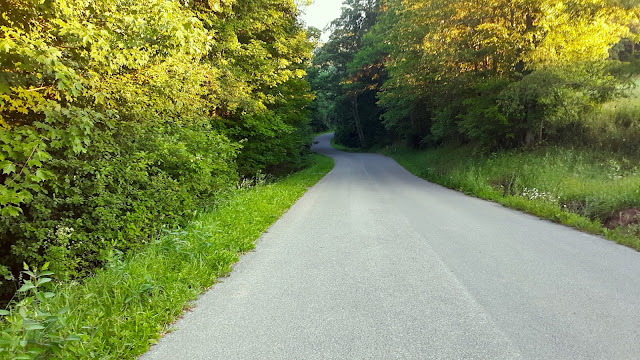 When I reached town continued walking right down the main road.
Firefly Farms is a small shop on the main road that sells cheese that
is made at the shop.  It sells other little treats and wine as well.
I've only been in the shop a couple of times.
Prices are quite high.
Had a free sample one time of their goat cheese which was delicious,
but it cost $28 an ounce.  A bit too rich for me. 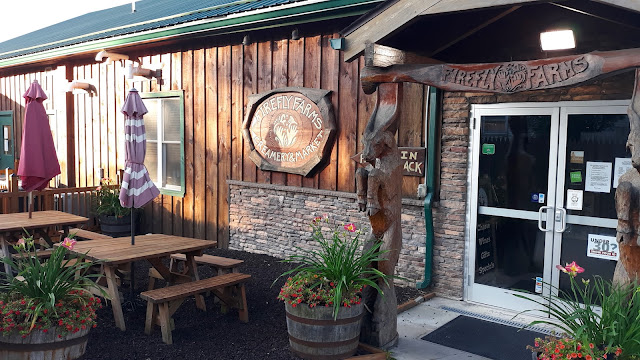 Continued walking through town and on over to the ball park.
Walked around the loop there 3 times.
Nice walking there because most of it was in the shade!!
Saw Lena walking and then a little later saw her daughter
Rebecca walking too. Sometimes they walk together and other times alone.

From there it was back to the main road and home again.

Here's a picture of the new red metal roof I saw being put on. 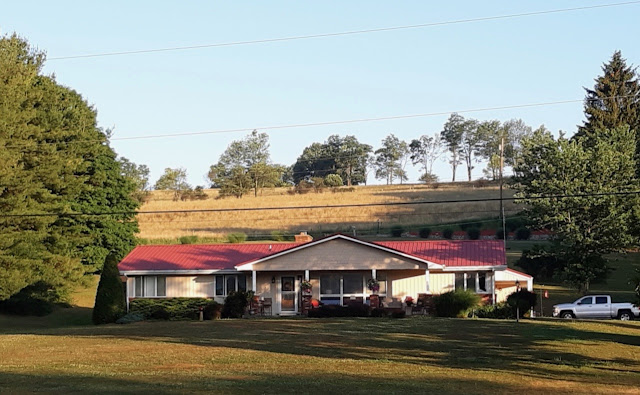 A few deer around again but didn't see any rabbits.

On the way home a speeding car passed by,
followed by a police car with lights flashing.
Speeder pulled over and I suppose got his ticket.

Black Eyed Susans have started showing up along the sides of the road.
It is our state flower.
(Maryland) 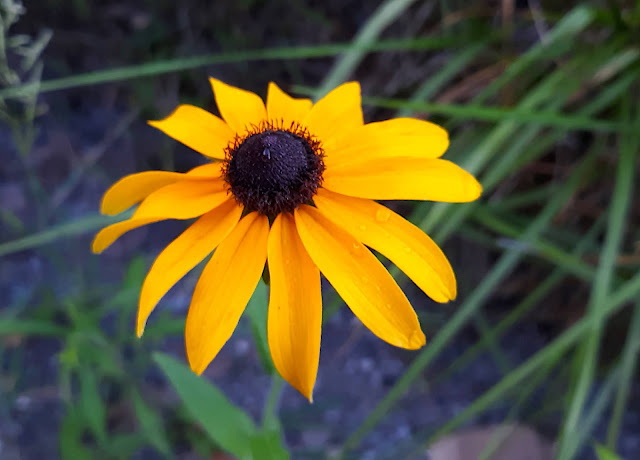 We got a call this morning saying that our Trex had come in.
Ken hooked up the trailer and went to pick it up while I stayed home
and finished my morning chores.
Then went to sit on the porch awaiting Ken's return.

Heard Ken coming up the road and he was just about to the
driveway when some of the Trex started sliding off the trailer.
20 pieces out of 40 ended up in the road.
Got the truck and trailer out of the road and then we went about
picking up the rest of the load.
Each board is 16 feet long, heavy, slippery, and very flexible
so it was quite a job picking it all up.

We finally got it all picked up and around back ready for it to turn into a deck.
Just too tired after all that so didn't start work yet.
That will happen tomorrow.
Thankfully it happened right at the driveway and not in the
road somewhere along the way.
It is not like Ken to lose a load.
He was a block from home and thought he saw the load slip down a bit
and almost stopped to tightened it down but figured he was
so close to home that it wouldn't matter.
He won't think that way again!

Other than that we didn't do much else.

Thanks for stopping by.
Life is Good
Find the good in your day.
happyone ❤️
Posted by happyone at 6:10 PM

...Trex is nice material, but sure can be slippery! $28 an ounce is a bit too rich for me too.

I know what you mean about heavy stuff! When we do intense lifting, we're so pooped!

$28 an ounce? Wow, I can't imagine a cheese worth that much and I love cheese! Glad you got your Trex... sorry about it sliding off the trailer. I guess on the bright side, it didn't all slide off. Have a great weekend!

I want to know who can afford $28 an ounce for cheese! I would be hard pressed to pay that for a pound. LOL I feel for you both with having to manhandle all those boards, but am glad it was not somewhere along the way with Ken by himself.

I'm glad he was close to home when it happened. What a hard job to get it back on the trailer. I'm glad he made it up the hill. Take care and rest this evening! Hugs!

Oh that must have been discouraging. This live and learn stuff never gets old, right? Ha! No wonder you took a break from all things deck.

I never knew such expensive cheese existed. That's wild! Do they have a lot of customers? Do they have more reasonable options?

Good that Ken didn't lose the Trex until he was almost home. I can see why those 16' pieces would slide once the first couple started. But at least you finally got the stuff so you can work on your deck.

That sounds like a big job to pick up all the Trex. I am glad Ken was almost home when it happened. It's so good you will be able to get the deck done now. I'm with you, I wouldn't pay $28 an ounce for cheese. Have a good Saturday and I will see you again soon.

Hi Karen- Glad that you have the Timber for the Decking at last -and none of it was damaged from the fall. Hope the days are fine so Ken can build the Deck. Best Wishes. KEV.

Heck, you could almost buy your OWN goat for that price & make cheese for years to come! Love the picture postcard photo of the roadside flower. As for the mishap, the bright side is, no damage to the material...but, what a chore that musta been!

$28 an ounce? Their mice must have expensive tastes if that's what they use in their mousetraps.

I like the red roof and the black-eyed susan! That is expensive cheese, I guess the shop caters to the tourist visiting. I am glad the mishap happened close to home and your driveway. Happy weekend, enjoy your day!

Wow, who pays that for cheese? It's a shame about your boards falling off the truck but at least it was near home and none was damaged. The work will be worth it once it's all done and you'll have a tale to tell. Pretty flower photo. We have a different flower thaty we call Black-eyed Susan - Thunbergia.

Yikes, scary about the load. Ted will never go without truly securing things...because once he did lose stuff out the back of his truck and I let him know that straps were made for tying things down ...I make him use ties to not shift front to back or sideways either. LOL I know I make him nuts. But we are always judging any loads we see. I am sure your Ken is not one of those careless trailer haulers. Glad he was at the driveway. Wow, now that was fortunate. Good you could help him too. Blessings to you hard workers. xoxo, Susie

The Black-eyed Susan is a gorgeous flower . Good to hear that the mishap didn’t cause personal harm.

Glad the mishap wasn't serious and he didn't get hurt. That cheese is a bit too spendy for me too. I wonder if it's popular at that price.

Oh, dear! That was a lot of work with the Trex! I love goat cheese, but usually buy the small roll at the grocery. I’ve never thought about how much a pound of it might cost, though.

You had to work hard! Good thing it happened in the driveway, you are right, but isn't it uphill?

Sorry about the mishap , Karen, been there done that with other things!
That shop does seem a little pricy, but I enjoy small shops like this. With this covid 19, my visits anywhere are limited to dr.'s offices and grocery shopping.
Your temps. are great we are so hot and humid.
Enjoyed your photos, have a great weekend,
Blessings,
Sue

Yes ... some cheeses can be quite expensive!

Well, that mishap could have been worse! Pleased it wasn't ... but it must have been tiring sorting it.

Whoa! Glad that turned out better than it could have. I understand you waiting to start in on the deck. Maybe a couple ibuprofen would do you well, too. :)
Sounds like a nice walk for the day. That is a nice looking shop.

Looking forward to seeing your completed deck! I don't hate a lot of foods but goat cheese is one that I do! Yuck!

Your new deck will be worth a little mishap. "All's well, that ends well."