The owls are another one of the porcelain birds that I have
that was my mother in laws. 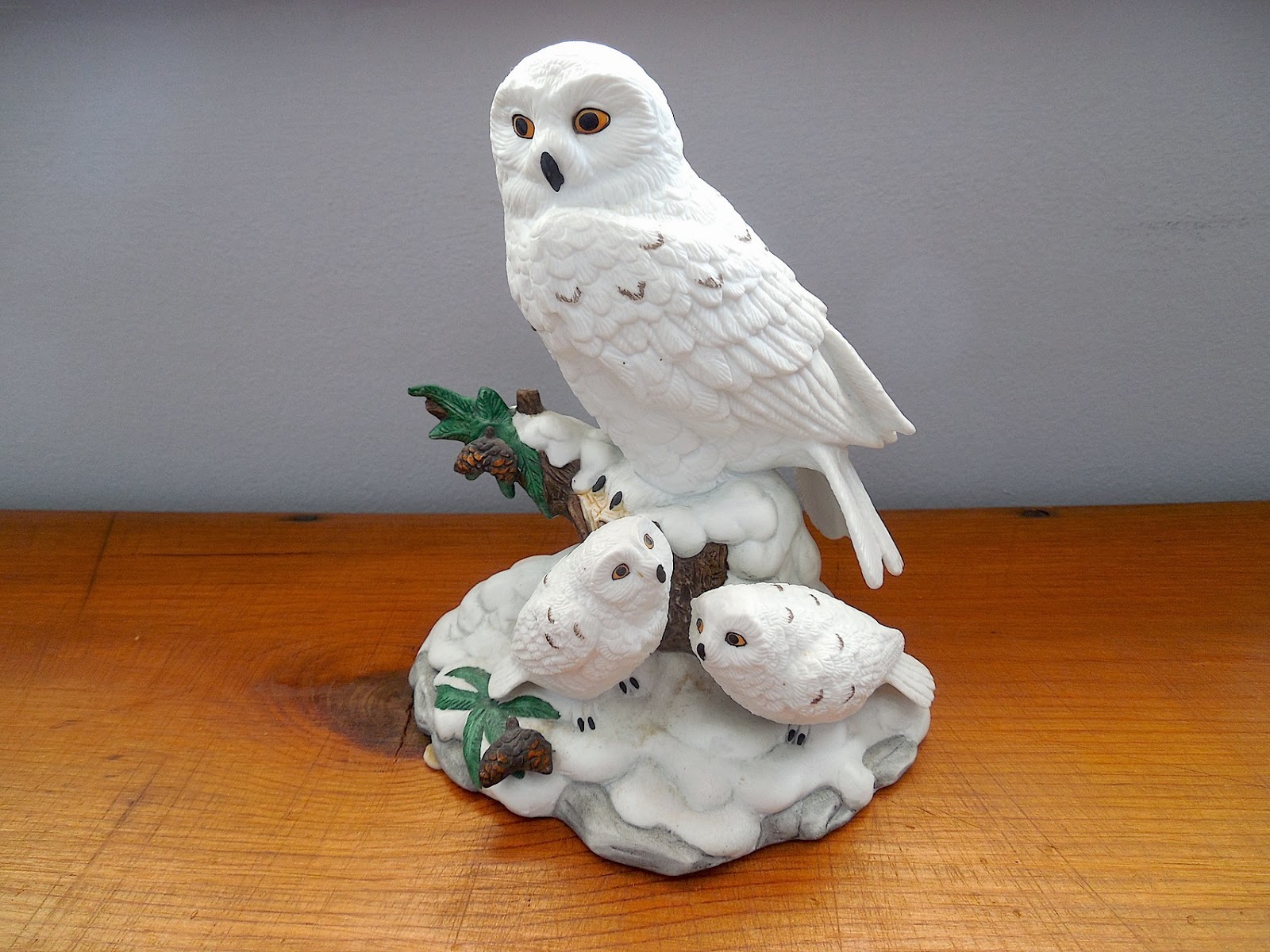 ☀     ☀     ☀     ☀
It was above freezing yesterday and there was some melting going on.  Then it all froze during the night and this morning it was 13 degrees, windy and snowing so another 6 mile walk in the basement for me.

Remember that puzzle piece that I said was missing from the last puzzle I did?  Well, it's not missing after all.  I was cleaning out my vacuum cleaner this morning and there it was.  : )  It is a good thing my vacuum doesn't have a bag or I never would have found it.

By mid morning it cleared up and the sun came out though it was still in the teens.  After lunch I went outside just for an hour or so to get some fresh air.  Did a little snow shoveling and walk around.
I stood in my driveway, zoomed in on the mountains and took this picture.  The Farm Loop is up that way. 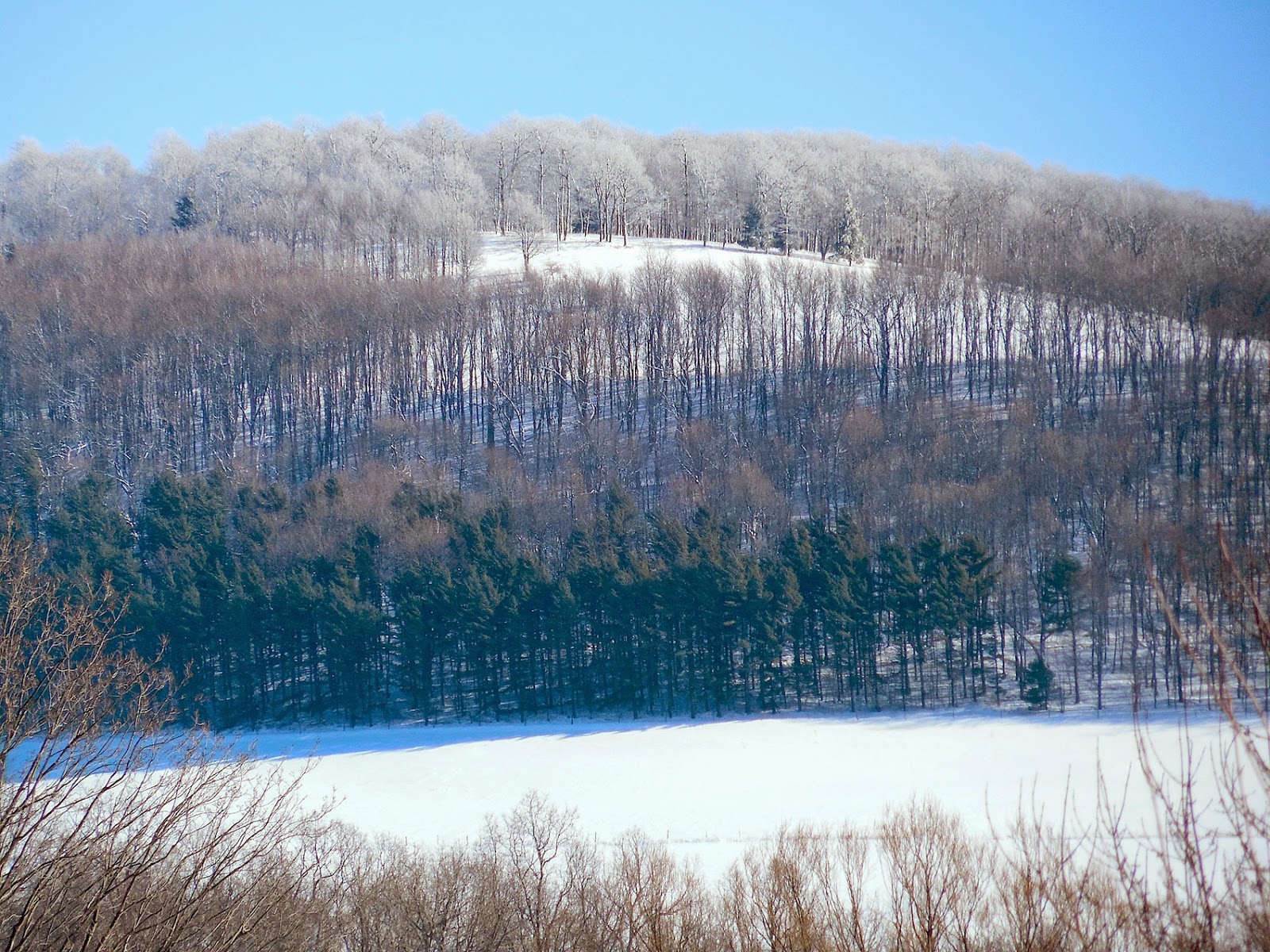 Late afternoon we went to the library.  The two books that I had on hold were ready for pickup.  Also picked out another book.  We had a few more errands to do and then since it's Monday we stopped at Brenda's for half price pizza on the way home.  Brenda has Black and Whites and I always want to buy one.  I love them.  Used to eat them all the time when I was a kid with my grandmother. : )  Today I decided to get one and have it as my snack this evening watching television.  We ordered it to go and when our server brought it wrapped up with the left over pizza and the bill she told us, "No charge for the Black and White.  It is on the house."  Wasn't that nice?!!! It is hard waiting to eat it.  Won't be long now. 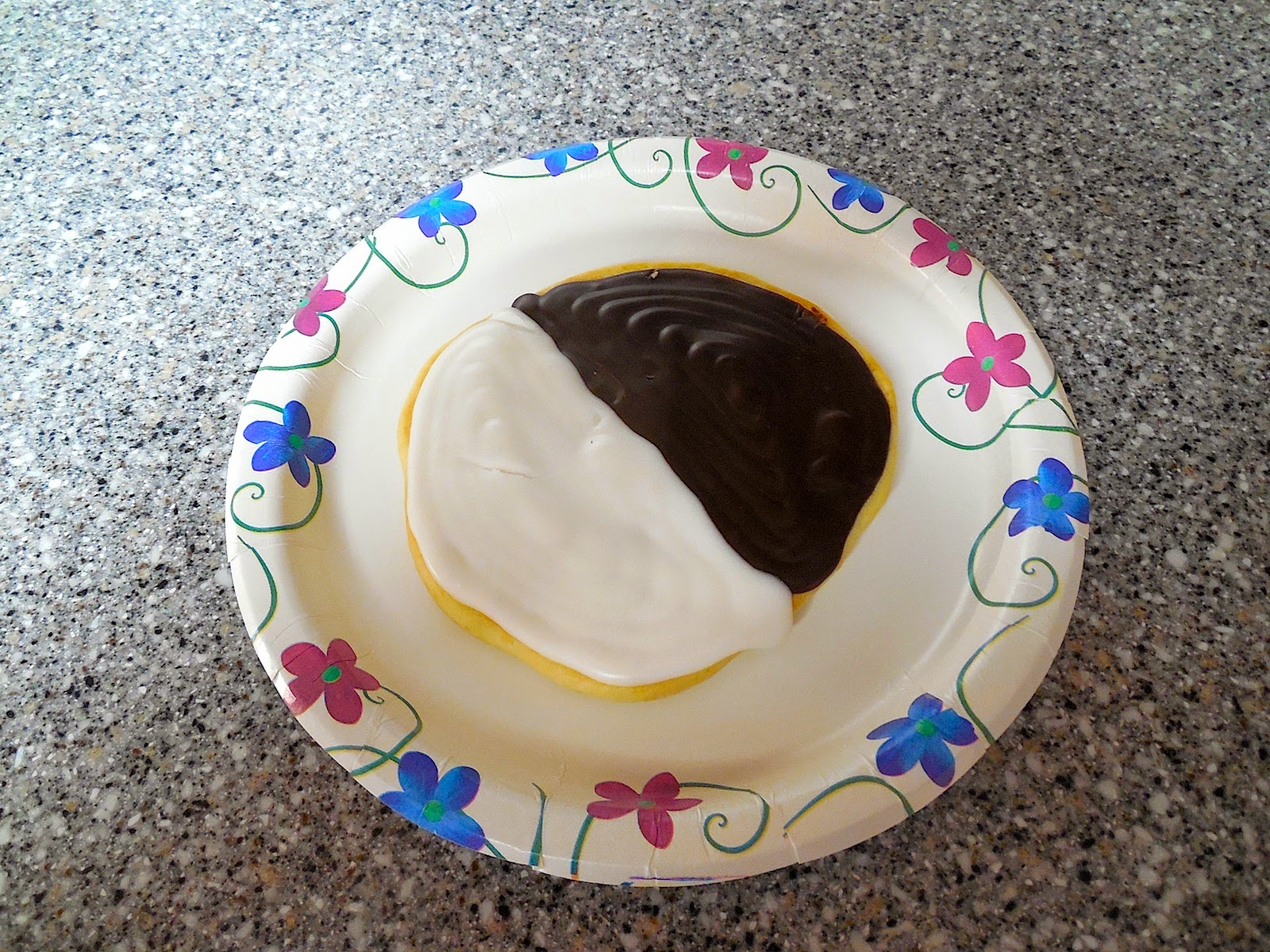 Hope your day was a happy one and you smiled often.
happyone : )

You may be deceived if you trust too much,
but you will live in torment if you don't trust enough.
~ Frank Crane
Posted by happyone at 6:44 PM

Hi Happyone! Great quote! I bet you'll love every bite of that Black and White! How yummy! We walked at the mall because of the VERY cold temps. My hubby walks inside sometimes, too.

Brrrr! The teens are cold, cold cold. I would have walked in the basement too. I love our library here. It's one of my very favorite places!

So glad you found your puzzle piece!

The outside scene is beautiful.I love that winter blue sky.

The Black and White looks yummy. Hopefully warm weather will come this way so you (and we) can get outside for an extended period of time.

Love the owl with the babies.
Oh gosh, more snow. It seems like a very snowy year for so many. We've only had one snow (ice) fall, but it did stick around longer than normal due to the cold temps.
How pretty to look out at mountains. Even prettier when they are snow covered.
That's neat how you found your missing piece.
Would you believe I'd never heard of a black and white until I moved here. There are a lot of transplants from NY and NJ here. When my boys played hockey one of the dad's from NY was talking about them. It looks good and I hope you enjoy it.

The temperature actually climbed to 25 here this afternoon. It snowed in the early morning, but then the sun came out and the temps went up. Tomorrow it is supposed to be near 30.

I never heard of a black and white. I'd like to know what it's like inside.
I'm very glad you found the missing piece of the puzzle.
The quote about trusting is so true!
Mary Jo

Is the Black and White the same as a neenish tart? They look similar, i love neenish tarts.
I also think those owls are really cute.

Your farm loop scene looks beautiful. I love the owls, very pretty! So glad you found the puzzle piece.. And that B&W cookie looks delicious.. Have a happy day!

Coloring Outside the Lines said...

That's a thought provoking quote. Pretty snow scene and the black/white looks yummy. That was a good deal that you got it free! Have a wonderful day!

How wonderful that you found that missing puzzle piece! We have a central vac system, and it takes forever until it is ready to be emptied! Lovely owls! I'm still in the mood for pizza - never have had it yet! :-) Beautiful scene in your picture!

That Owl is Awesome! and so is the cookie!

Ahhhh...this is where the story of the cookie began. It is very attractive and distinctive and if you remember them fondly, it has to have been great.

I very much like the owl statue. :-) Glad you found your puzzle piece! I had wondered if it had fallen on the floor, unnoticed. What a lovely view of the mountain from your driveway. That definitely would have been a selling point for me!

Love the snowy owls. They would be right at home in that winter scene that you photographed.