Flags around town and how we met 51 years ago 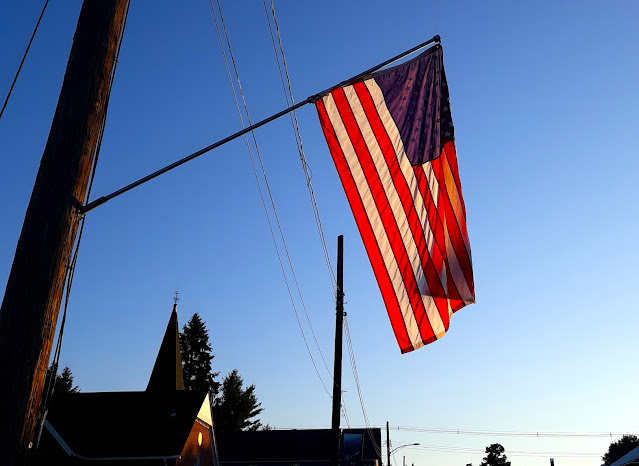 55 degrees this morning and sunny when I went walking.
Quiet around town at first and then people were out and about
getting ready for the parade and other 4th of July activities.
Walked all over town, the lower cemetery, the ball park loop,
and up Sale Barn Rd a ways.
People were at the Fire house starting to get the food prepared
for after the parade.
Someone was getting one of those mechanical bulls set up
as well as a bounce house for the younger kids.
The fire engines getting a final shine and a flag for the parade. 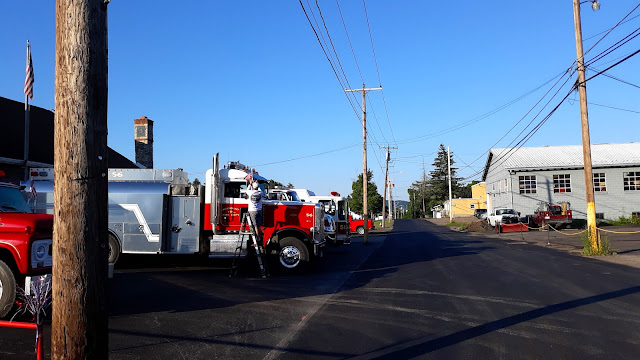 The first chairs I saw saving spots along the parade route. 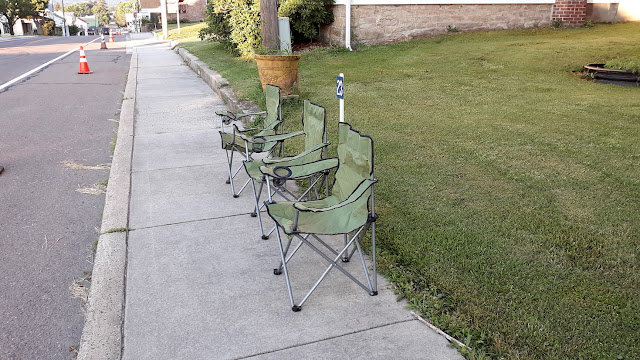 Took a bunch of pictures of flags that people had put out
and made a collage out of just a few that I saw. 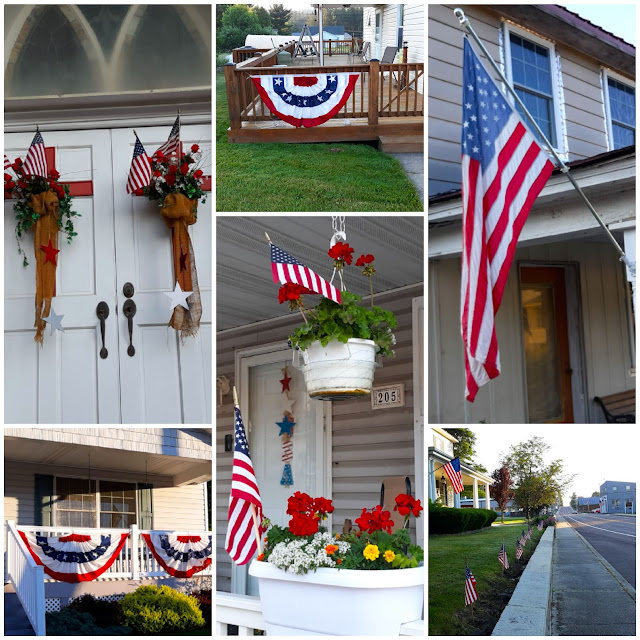 Roger was out walking Andy.
John walking his dog.
Haven't seen Margaret for a while so stopped to chat with her.
Joy was out walking too.
As I was nearing home I saw 4 deer run across the road.
Walked 6 miles 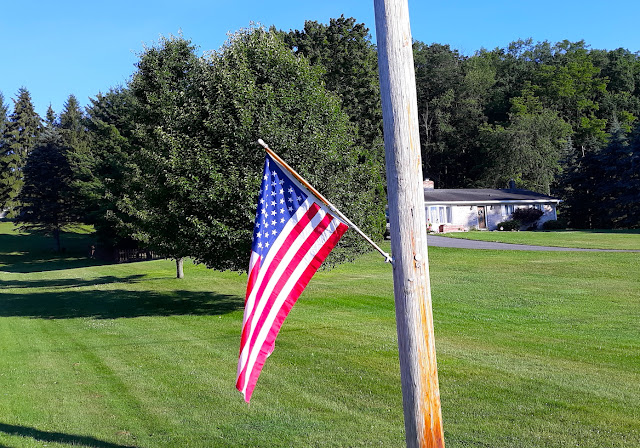 We've been to town other years to see the parade but stayed home this year.
We puttered about the house and yard today.
Went for a ride in the ATV around Happy Trails.
I made potato salad to go with the grilled hamburgers
and corn on the cob
which we ate out back on the deck.
The weather was perfect.
Sunny and in the high 70's - it may have reached 80.
❤️    ❤️    ❤️
Today 51 years ago Ken and I met.
I've told this story a few times before but to those of you
who are new to reading my blog may not know the story.
Our meeting is somewhat unusual.
My mother and father were divorced and my dad had a
boat which he kept on the Hudson River, in Nyack, New York.
I would drive up to the boat on weekends to see my dad and his girlfriend Jeanne.
One 4th of July I went up to the boat for the holiday
with my boyfriend and another friend of mine to spend the day.
Jeanne's two kids were to be there too
and I would be meeting them for the first time.
Her daughter Kathy was there with her 10 month old baby, Diane.
Her son, as you probably have guessed is Ken
who came up to the boat with his girlfriend.
Well when the two of us met there was a connection right away
and Kenny captured my heart that very day.
It made things a bit awkward
because we both happened to be engaged to other people.
We ended those engagements and started dating.
We were married the end of January just 6 months later.
Though my dad and Ken's mother did get married
they got divorced several years later
but for a time Ken and I were step-brother and sister!
My mother in law was also my step mother.
My sister in law was also my step sister.
When David and Debbi came along, not only were they our kids,
but also our nephew and niece.
Pretty crazy huh.
❤️
Thanks for stopping by.
A happy day to you. 🤗
👩🏻‍🦳 happyone ❤️
🙂Be the reason someone smiles today.🙂
Posted by happyone at 5:37 PM

...I wish you many more happy years together.

Wow, what a story! It also seems that you each found the perfect partner in each other, you were meant to be. Happy anniversary! We have been married 52 years. Your dinner sounds so good, and I am glad you are spending the day just the two of you together.

... and here's to many more happy years together :)

I enjoyed your 4th of July walk! And I enjoyed your story even more! God had a plan, and you are blessed to be together all these years.

I remember reading your story before but it is a good one and worth reading again. Jake and I were considered step-cousins, as his Dad married my Auntie when Jake was 16 So my brothers-in-law are also my first cousins.

I love the story of you and Ken meeting. It is so unique and it is so wonderful that you are together 51 years later. That in and of itself is unique in today's society. You and Ken were just meant to be. So glad you had a nice 4th of July. I love the collage of all the flags in your town. It is so nice to see all the flags flying on National Holidays. See you again tomorrow!

I love the way you both met - romantic!

What a great 4th of July post! I love the flag collage. I will admit to being a bit envious of your weather for we were scorching hot at 101 degrees.

Beautiful holiday weather! Delicious 4th meal and perfect having it all outdoors.

Interesting family. I would have a time trying to keep it straight.

Hello,
I love the flag collage. It is a nice story how you and Ken met.
Have a great day and happy week ahead.

What a great story about how you and Ken met. Love it.

That is a nice story how you and Ken met 51 years ago. Chris and I met 45 years ago...at an Inn after work. Stay well there Karen and Ken.

Obviously, after 51 years, it took! I remember this story, but over the years it had become a little fuzzy. Good to have a refresher. When the parents divorced, it might have been awkward for the two of you. Sounds like a lovely, low-key holiday.

That is a pretty crazy story but you guys were obviously meant to be!

I never grow tired of hearing how you and Ken met, Karen. Such a unique story. The thing I found heartwarming is that while other relationships ended, one was formed that has lasted for 51 years! Incredible...and to God be the glory for bringing you two together.

What a wonderful story, it's magical how you met all those years ago and are still enjoying each other It was meant to be.

I remembered the story from before but enjoyed reading it again.
Nice collage of various flags. I especially like the 2 matching door hanging ones. Swags? I know there's probably a word for them but I can't think of it.

That sounds a tad bit convoluted.

Love the collage of all the flags around town. Such a great story of how you met and how you made a connection right away. Glad you were both smart enough to end those previous engagements. Happy belated 4th. Praying for our country!