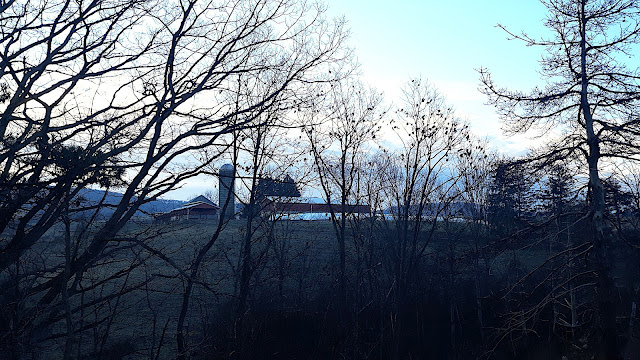 31 degrees this morning, calm and once the sun rose there
was a mix of sun and clouds.
Had a nice walk all around town with no worry of ice or snow.
Walked around both cemeteries, the ball park, and down
the main road a ways.
Joy was out walking and we stopped for a chat when I was coming
down from the cemetery and she was going up.
I could not believe my eyes when I saw this
Forsythia blooming!!!
A spring plant blooming in Dec in freezing temperatures.
I touched it to make sure it was real and it was.
Amazing isn't it?!! 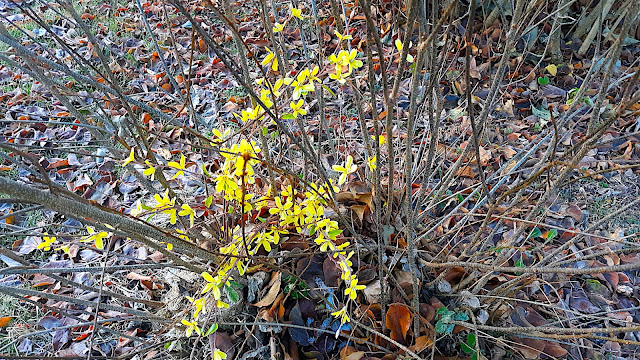 Stopped for a chat with Paul who works for the town.
He told me some information about that old house in town that
had the vegetation cut down around it.
Years ago it was owned by Farmer Bill's (who I've mentioned whose farm
is on the Farm Loop walk) grandfather.
The owners after he died had it looking great Paul said and it
was a beautiful home.
Since then it has been sold several more times and the
man who owns it now bought it quite a few years ago.
He doesn't live around here and has just let it sit for years.
The town has taken him to court over it and he has to either
sell it or have it demolished.  If he doesn't the land goes back to the
town and they will demolish the house.
So rumor has it that he is making it look presentable and then
will try to sell it.
Will be interesting to see what happens to it.
I walked 6 miles
The next town Christmas decoration is this Poinsettia.
It hangs at the intersection at the main road and the road
where we used to live in town. 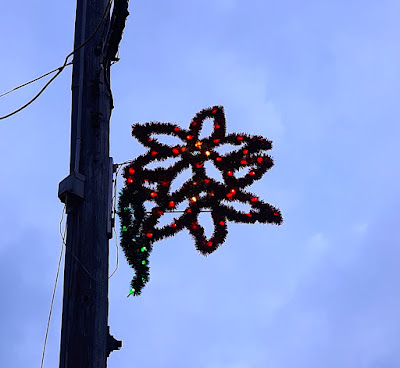 🌤    🙂    🌤
The morning was for housework.
Today is Liz's birthday 🎈and her and David came over this afternoon
and we had birthday cake 🎂which I had baked yesterday.
It was the first time I used this recipe and it was a hit.
I sent the rest of the cake home with them!
We walked around Happy Trails a bit this afternoon.
We also put up some Christmas lights up on the railing of
the front porch.
An easy supper tonight of hot ham and cheese sandwiches
with a few potato chips.
Thanks for stopping by.
A happy Wednesday to you. 🙂
👩🏻‍🦳 happyone ❤️
Posted by happyone at 5:51 PM

...early flowering plants like forsythia have a very short cold requirement before flowering. This plant most have gotten just enough cold and then things must have warmed up enough to make the flower buds think that it's spring. A few years ago we have cherries flowering for Christmas.

I can never eat just a few potato chips! Or marshmallows. I think the poinsettia is my favorite of the Christmas decorations.

I know you love having them close by to celebrate special days. Enjoy your evening! Relax and enjoy!

Enjoying your photography in every post! The Forsythia is amazing. How can a plant like that bloom in winter? Wow. I especially like the way you tell us about those you meet on walks and about the conversation. You are so regular and reliable. As always, thank you for sharing.

That is good to know the history of that house. I hope it fixes up nicely and someone gets it who will love it.

So cool to see those blooms!
It's sad that someone just let that house go. I hope it gets purchased and loved!

Hi Karen - that is very interesting about that old house. I hope it gets fixed up and sold to someone who will love and take care of it. We saw some flowers blooming on our walk today. I had to take my coat off because it was too warm when we walked this afternoon. We need snow. The weather prediction is that maybe some will come next week. I sure hope so. So glad that the cake you made for Liz turned out well. I will have to look for some books by the author you said you are currently reading. Have a good Thursday and I will see you again tomorrow.

My forsythia has never done that! Found myself wishing my town would step in on the properties that sit derelict around town. It's a shame.

I'm amazed at that forsythia plant blooming this time of year.

I think it would probably be cheaper for the man who owns the house to try to sell it than to have to pay to have it demolished. I do hope it sells to someone who will fix it up and make it a home. I hope Liz had a wonderful birthday.

Nice that you could walk without concern for ice or snow. That Forsythia is a little confused but pretty nonetheless.

I have never seen the Forsythia bloom twice, our clematis had some late blooms. The Poinsettia decoration is pretty. I hope someone renovates the old house. The hot ham and cheese sandwich sounds great. Take care, enjoy your day!

You're right; some plants are still blooming over here too.

Interesting story about that house. I always feel bad when I see old houses that have be left to decay! Hope someone buys it that can bring it back to its formed glory.

Nice cheerful surprise to see the forsythia in bloom this time of year.
As a kid, I called it "for Cynthia"...lol!

As you probably know, I am part of the 'save the old house' club, and do hope that there is a person out there that can see the potential in that old house and give it a new life :)

It's amazing to see some plants still blooming.

I'd have sent the cake home with them too. Lol
I really DO like the poinsettia light fixture (I don't believe I've seen one like that).

It seems that even nature is confused with the Forsythia blooming now.

Must be fun to walk around Happy Trails. It's so pretty. That Forsythia in bloom is amazing. Kind of strange, isn't it. I'm no good at baking cakes but sure would love to have a big slice to eat right now.

Surprising for sure to see that Forsythia. Happy Birthday to Liz! How nice to have a homemade cake. That's interesting about the city lighting the fire under that homeowner.