An early-morning walk is a blessing for the whole day. Henry David Thoreau
Walking is the perfect way of moving if you want to see into the life of things. It is the one way of freedom. If you go to a place on anything but your own feet you are taken there too fast, and miss a thousand delicate joys that were waiting for you by the wayside. Elizabeth von Arnim

60 degrees this morning and calm.
It was cloudy and looking up to the mountains it was foggy,
but no fog in town.
Walked around town and then headed up to the cemetery.
Went to see the bulls and number 60 and 61 are no longer alone.
Lots of bulls now to keep them company.
They must have just gotten there because they sure were noisy
and haven't gotten used to being there yet. 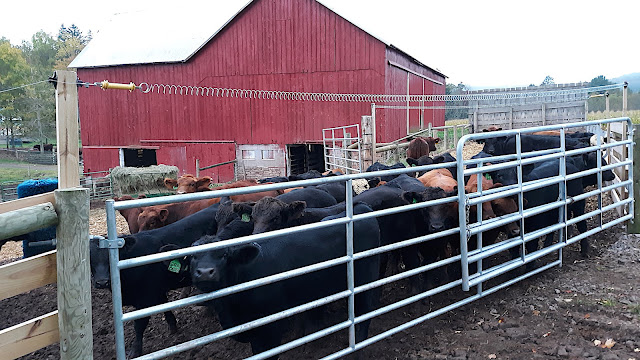 Making another loop around the cemetery I saw Lena and we
walked a couple of loops together.
One of the cows from the other field escaped and Lena called
Farmer Marvin to tell him. (he is Lena's brother)
By this time the cow had walked up the farm road to the house
and Marvin went to get the cow.
We walked back to town, Lena was done with her walk
and I continued walking around the other cemetery and then
over to the ball park, around town again and by then I had my
6 miles walked. 👟
Didn't see anyone else out walking.
Stairs Picture #10
The little girl who watches me walk by lives at this house. 🙂 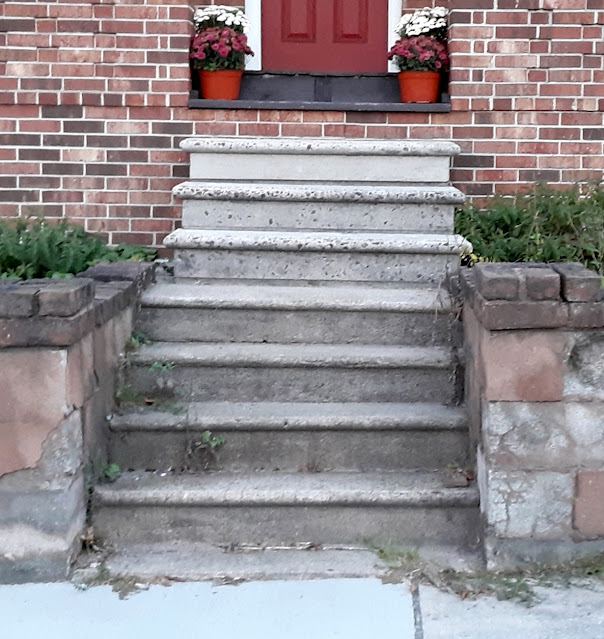 🍁    🍂    🍁
It was an inside working morning but after lunch
I went outside again to see the progress Ken has made on the road.
This is where I turned around to look down from where I just walked. 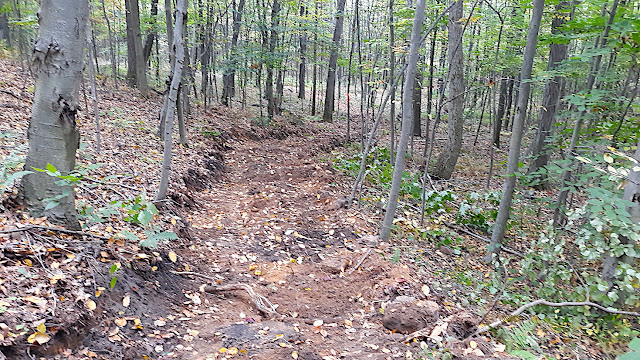 Then continued walking up this way. 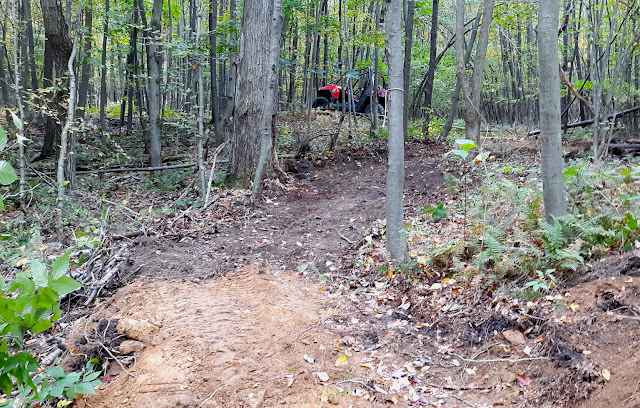 There is more of hill to it than it looks from the picture and also angled a bit
so Ken took dirt from one side and moved it to the other
the make it more level.
I walked some trails and added a few branches and sticks
to the fences along the way.
The sun never did come out today but still it was a good
day to be outside.
Thanks for stopping by.
Happy Wednesday to you. 🙂
👩🏻‍🦳 happyone ❤️
October had the tremendous possibility.
The summer's oppressive heat was a distant memory,
and the golden leaves promised the world full of beautiful adventures.
They made me believe in miracles.
- Sarah Guillory -
Posted by happyone at 06 October

...you and Kenn never run out of projects!

We had a rare foggy morning the other day, but I couldn't get in a good position to photograph it.

I wonder if a handrail will be required for code when and if they decide to sell their house. A more level path will be nice. Nice trails on your property!

I always admire where you live. To live in among the trees like that is so wonderful.

That's a lot of stairs and a very small door.

Hello,
You do keep busy, between walking and taking on home projects. I love the October quote and the cattle image. Take care, enjoy your day!

I like that set of stairs! The trail is coming along nicely.

Your trail is looking good. That's a lot of cattle and soon they will recognize you when you pass by.

You and Ken certainly keep busy ...
The trail is coming along very well.

I like the matching pots of flowers on today's stairs. Otherwise the stairs would look kind of plain.