55 degrees and cloudy when I started walking
and of course dark.
On the way to town saw a couple of deer running along
the side of the road.
Then just getting to town saw another one but sadly it had gotten hit by a car.
Walked all around town, the ball park and both cemeteries. 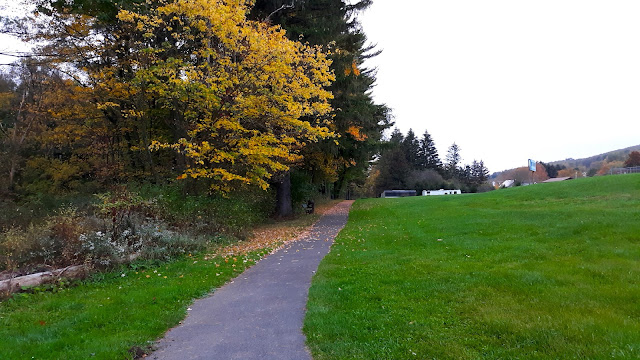 Saw Lena again and we walked around the cemetery a
couple of times together.
Went down to see the bulls.
They seem to be settled in now and were quiet.
Walked 6 miles
💰 Found LOTS of money!! 💰
💰
Walking down the road just getting to the end of town
I saw what I thought was a dollar bill folded in half.
But in fact it was a 20 dollar bill.
Then I saw another, another, and another till I had
8 of them in my hand.
Felt great having found $160 but then felt bad that someone
else had lost it.
It was still dark but I looked around some more and started
finding the contents of a wallet scattered all over.
A debit card, a credit card, drivers license, and some other stuff.
When I got back home Ken found his phone number on line
and he called the man to tell him what I found.
We met Carlos at the Dollar General in Mc Henry
and gave one happy man back his stuff.
He passed through town last evening and stopped to get gas
and forgot he left his wallet on the hood of his car.
There was a few things still missing including the wallet itself
so on the way back we stopped to look around some more.
Ken found another 3 20 dollar bills and I found the wallet
with a few other things in it.
Carlos got there to look around too when we were there
and we gave him the wallet and other money.
He was so thankful and asked what he could do for us.
Of course we said nothing, it was just so nice to be able to give him
back what he lost.
It amazes all of us how all those things just stayed there
scattered around all night long!!
🙂    ❤️    🙂
Stairs number 14
These are at the cemetery
Must have been an entrance there at one time.
The cemetery was established in 1869 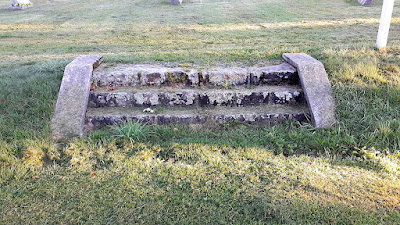 Yesterday afternoon Ken and I went for a hike around Happy Trails
and left our property and went on to the state land.
This is the view at the end of one of the trails.
Well worth the hike. 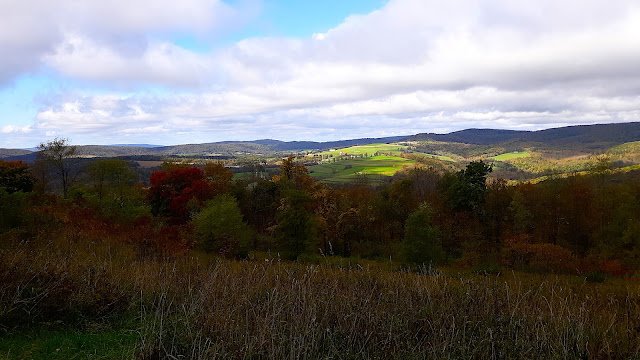 Spent more time outside this afternoon.
Ken's road making through the woods is coming along nicely.
As you can see he just keeps moving along in the woods. 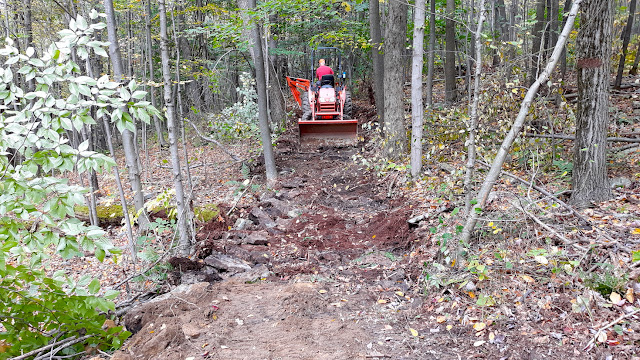 He made it to the edge of this dip which at times becomes a stream.
Just a trickle of water is there now.
This is the site of the next bridge he will make.
It will be a different kind of bridge than he's made before. 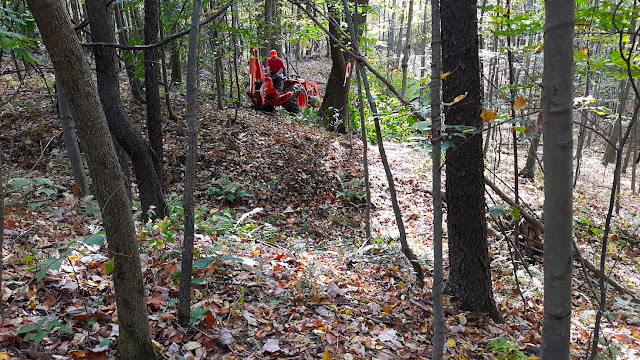 I cut some branches down that hung over the road and walked
around picking up more dead fall and putting it on the fences that I make.
Fall is our favorite season to be out in the woods.
Summer is our least favorite time - over grown and too many bugs.
That's it for today.
Thanks for stopping by.
A happy day to you. 🙂
👩🏻‍🦳 happyone ❤️
Nature gives to every time and season some beauties of its own.
- Charles Dickens -
Posted by happyone at 6:21 PM

Carlos is a lucky man to have such kind and honest people find his wallet and it's contents. You and Ken really went the extra mile to get it back to the owner. I admire you for that (and many other things too :).

Oh, I can just imagine how relieved Carlos was...first that you found it and returned it to him. But to not have to wonder if someone found the wallet, and what would they do with it, and then to not have to go through the trouble of having to get new drivers license, etc.

Those steps look sort of lonely, don't they?

...how nice to be able to make Carlos' day better.

So nice that you and Ken were able to find Carlos and give his money and wallet back to him. I know he was grateful. It was a blessing that you found his money and wallet - someone else might not have been so honest. I love the view from that trail you hiked. How wonderful to be able to hike so close to home. Ken is staying busy making that road. He is always doing something to improve your property. Hope you have a great week. It is raining here and our first snow of the season is expected tonight. Too early for me, but we need the water. See you again soon.

How nice to do a good deed and find the wallet that this man had lost! That's a happy story! Enjoy your evening!

I live that you found the money & info to call/contact the owner!!! Such a feel good situation for both you, Ken,and Carlos!!

Such pretty landscape on your property. Another bridge...awesome.

How lucky for Carlos. I remember the day I forgot my mother-in-law on the hood of the car.

Hello,
What a happy ending for Carlos, that you found his wallet and money. Some people may not have been so honest. It is a feel good story. Take care, enjoy your day and week ahead!

That is a great story about Carlos- you and ken are surely Good Smaritains!

Carlos won't forget the kindness of a stranger.

Wow, that's great that you could track down that phone number and give Carlos back all that he lost. Glad you came along that road and I'm sure Carlos is, too. That's a nice road that Ken is carving out on your property. It's nice to be up against state land that generally extends your privacy, too. Take care...

What a blessing you must have been to Carlos!

How absolutely wonderful that the right people found that wallet and cash. So many would not have been as honest. Your new road is coming along nicely . Fall is one of my favourite times to be outside too.

Life is Good when one can do someone else a good favor. Yay for you! I enjoyed this post so much. The new trail through the woods is right down my alley.

So glad it was you who found the money and had the joy of returning it. Not a lot of people could have parted with that much money. I love honest kind people. You and Ken are very special. Love yhe road through the woods.

I would have been very nervous had I discovered my wallet and contents missing! What a good deed for you and Ken! You are creating a definite haven in the woods.

Wow! So glad you found Carlos and I know he is glad to have found you folks with his money, etc.

I missed this post ...
Thanks for your link from todays one :)