Well Vee, I did walk 9 miles this morning.
I didn't mean to walk that far it just somehow happened.  I had planned to just walk around the lake but my feet went in the opposite direction this morning.  I walked down the road and over to the school and then out toward route 144. The other day in the car I noticed a church with a door I liked.  This month United Bloggers theme is doors and I thought it might be good for that.  I crossed over 144 and walked around the church grounds and snapped a few pictures of the door.  Out behind the church is a cemetery.  I was disappointed to find the gates locked so I couldn't walk around in it, but I did snap these pictures over the fence. 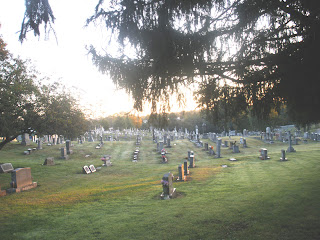 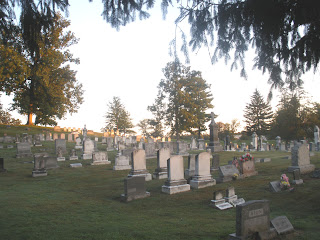 I sure would have liked to walk around in there.
Instead of walking back home the same way I had come I decided to walk along route 44 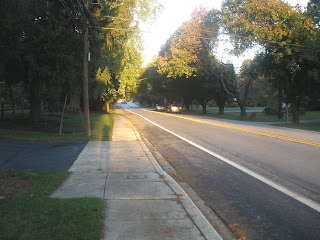 to see if they had broken ground yet for the new library.  There is already a library there, but a new one is being built next to it.  It's not the library I usually go to because I don't like the layout of it.  It is choppy and seems to have been added on to a lot.  Once the new one is finished I will probably come to this one since it is the closest one to home.
I thought the library was closer to the church than it actually was which made my walk longer than I thought it would be.  Work has started on the new library, but I didn't take any pictures because lots of workers where there as I passed by.  Didn't want them to think I was taking their pictures. Continued down the road and turned down Gray Rock Road and walked until I came to the path through the woods.  I saw by this sign here that the path is going to be renovated. 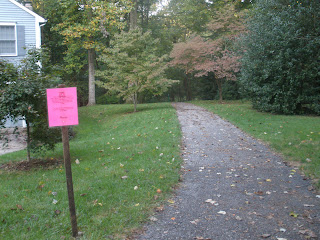 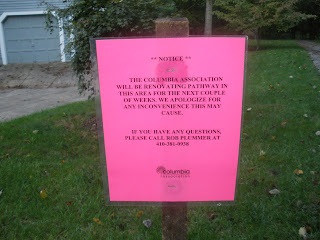 The path is still quite good with only a few rough places along it.  It is nice how they keep them in such good condition for all of us to walk along.
Walking along the path I saw deer in three different places for a total of 7 deer.  At one point I turned off the paved path and went down a trail in the woods a short way to see the deer.  There is a bench along there and I sat down and stayed there for a bit enjoying the quiet of the woods before walking the rest of the way home.  Tomorrow I am going to go for a more normal 6 mile walk. I was out for 2 hours and 15 minutes. It was a nice cool sunny morning - just perfect for walking.

Yesterday it stayed cloudy but there was a breeze so my clothes tried out on the line.  I have another load out there today.  It is still nice and sunny and is supposed to be a beautiful day in the 70's.

We didn't eat the bean and spinach soup I made yesterday.  It is one of those foods which tastes better the next day so we will have that tonight.  I made the rolls to go with it but I did eat one just to make sure they came out right. 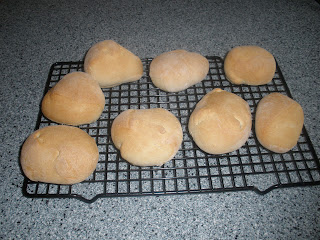 I used the bread machine and put the ingredients in it for French bread and then just hit the dough button.  Then took the dough out, cut it in pieces, let them rise and then baked them in the oven.  Didn't take a picture of the soup because some foods just don't photograph well and that is one of them.

Last night we went out to eat at Outback and got ribs.  We ordered a full rack and then split it in half and shared it.  Ken ate the fries with it and I ordered a sweet potato. It is nice that Outback will split the order like that for us.

We watched a new television series for us last night from Netflix called William and Mary.  It's a British show where two people meet on a dating website.  She is a midwife, he is an undertaker.  It's a blend of comedy, drama and romance and we liked it a lot.

I finished reading Hard Times by Charles Dickens.  That was book number 37 for the year.  I don't think it will be possible for me to make my goal of 75 for the year on LibraryThing.

Off I go to get some things done around the house so I can start another book and knit.
Have a great Thursday.
Happyone :-)
Posted by happyone at 12:03 PM

You just know that I am going to resist the urge to say... Resisting, resisting. Cemeteries...love to walk in them. So few people do and it can be stop and go because those tombstones are interesting.

Nine Miles!!! Wow!
I think you were walking along Old Frederick Road? That's 144. Was that the St. John's Cemetery?
Those rolls look really good!